THE BODYGUARD – from master writer Jed Mercurio (LINE OF DUTY). A tense thriller set against the backdrop of British politics; PTSD; terrorist plots … PPO David Budd (Richard Madden) is to protect the Home Secretary (Keeley Hawes) … and just like the Whitney Houston / Kevin Costner movie of the same name – again – the line blurs between work and pleasure. I was in the UK last week and downloaded the first 4 episodes of a drama that is getting 7m+ viewers on terrestrial TV – a ‘watercooler’ series / must see. Unfortunately, I now have to wait until i’m back in the UK to catch up via BBC iPlayer 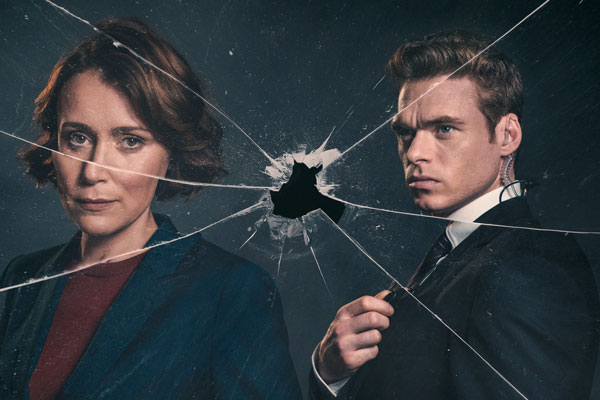 WHY DO PEOPLE LOVE THIS SHOW?

From the opening episode, we hurtled straight into the action – and see our hero, David Budd, on a regular, suburban train – with his children.  I watched the first episode ON A TRAIN and my heart was beating so fast, caught up in the intensity of the story, the element of danger, the characters & their performances.  This type of ‘terror’ is part of our every day life – airports, planes, trains – we all have become used to security measures – therefore, the story resonates with the audience.  However, although action packed and exciting – we want to know what happens to the characters because we invest in them and care.  Whatever the script, whatever the genre – we need to care about what happens to the people with whom we spend that 60 or 90 minutes.  This is an exciting thriller with carefully layered characters and although we instinctively know the genre ‘rules’ the writer still turns the story on its head at times thus keeping the audience on the edge of its seat.

I once had a conversation with Karen Glasser, Head of Development at Icon Productions about the ‘glamour’ of US vs UK cop shows / movies – is it because our cops don’t have guns that it can seem rather small / parochial at times? Did conquering the West give the US an edge on crime stories? However, I hope this new show travels to the US as it plays the drama / tension so effectively – performances and production values are outstanding across the board .. Or maybe it gets a remake – would be great to set this against the turmoil of Washington DC!

UPDATE: Netflix picked up the show … don’t miss it!